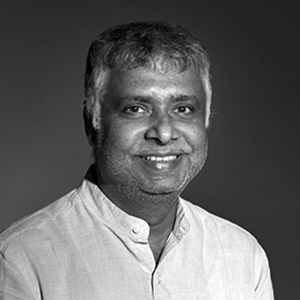 Alumni of Faculty of Fine Arts M.S.University –Baroda, where he had done Bachelor of Fine Arts in 1998 and Master of Fine Arts in 2000 with a specialization in Art History. Successively joined at Film and Television Institute of India (F.T.I.I) in 2003 to study three years Post Graduate Diploma in Film Editing .proximately after completing the Film Editing course instigated his carrier as an independent feature Film Editor. So far he has edited twelve feature films in various languages such as Malayalam, Hindi, English, Marathi, Gujarati and Arabic. Both as an editor and maker  he has extensively worked on all genres and forms of cinema .there are more than seventy documentaries commissioned by various agencies and broadcasting companies, more than thirty Advertisement Films, Worked as creative editor, and storyboard consultant for animation. He has also written four feature film scripts which are in various stages of pre-production.

Immediately after completing his Master degree in Art History, he taught Visual Art and Art History in various Universities and colleges, in the intervening time conducted remarkable workshops on visual art and Cinema with school students, Drama students and various youth and women organizations. Ventured into Video Art, Installation Art and Performance Art, made the innovative independent body of works as well as associated with few other Artists in this creative arena of expression.

From 2014 to 2018 worked as Associate Professor for Edit and Sound Department at L.V.Prasad Film & T.V Institute, from 2018 to 2021 worked in the school of Film & T.V at M.I.T-A.D.T University Pune as Associate Professor for Edit &V.F.X.during the same period he was a member in Board of Studies and syllabus committee. He has designed new courses; built infrastructure, developed various Curriculum for both Under Graduate and Post Graduate levels. In 2021 joined N.I.D as Senior Associate Faculty. His current area of interest is Trans media and Interactive Storytelling