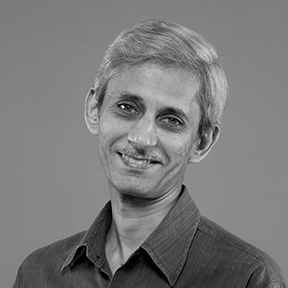 Ranjit Konkar earned his Ph.D. in Mechanical Engineering from Stanford University in 1993, after a B.Tech from Indian Institute of Technology, Kharagpur, and M.S. from University of Toledo, USA. His educational specialization is in the area of design and kinematic/dynamic analysis of mechanical systems and Robotics. His skills include programming in a variety of languages. Ranjit has been one of the developers of the Ergonomics module of the IGRIP robotics software of Delmia (erstwhile Deneb) at Bangalore.

At NID since 2007, Ranjit is affiliated with the Product Design discipline and takes courses in that as well as in many other disciplines of the institute such as Furniture and Interior Design, Ceramic and Glass Design, Exhibition Design, and New Media Design. These courses include Materials and Manufacturing, Technical Studies, Simple Product Design, Collapsibility and Experimental Structures, Kinetic Sculptures, Workshop Skills and Model Making, and Geometric Construction. Ranjit currently also heads the User-Centred Design Lab where he conducts projects on physical computing. He has also headed the Skill Development Lab (Workshop) at NID.

Some professional projects Ranjit has executed have been the design of packaging for cement bags, design of material-handling trolleys and trays for a yarn plant, design of inverter and inverter cabinet, and design of welding gas regulators. At a personal level, Ranjit has developed innovations in the domestic and automotive domains.

Ranjit has consulted for the International School of Business (Hyderabad)’s Design program, been invited to judge for Innovista, the Tata Group’s innovation contest, and serves on the review panel of National Council of Science Museums.

Other than at NID, Ranjit has teaching experience at VJTI and Father Agnel College of Engineering, Mumbai.

Ranjit’s subjects of extra-curricular interest include Animal Rights and Welfare, Vegetarianism, Environment, Gandhi, Astronomy, Music, Films. At societal level, Ranjit has been active in issues of sanitation, waste management, and environment, and has conducted animal rights campaigns as the trustee of Beauty Without Cruelty.