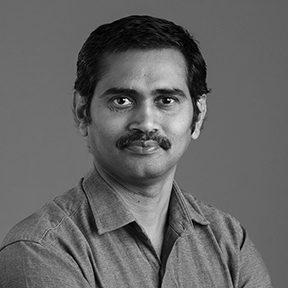 Amresh Panigrahi has 10 years of work experience and has been teaching at NID since June 2010.He is PGDPD in Lifestyle Accessory Design from NID. He has also participated in master of Strategy Design from Politecnico di Milano, Italy .He holds a Diploma in Advanced Computer Arts from the NMRC at the Center for Development of Advanced Computing, Pune and a bachelor’s degree in Architecture from College of Engineering and Technology, Biju Patnaik University of Technology, Bhubaneswar.

At NID,Amresh Actively contributing to New curriculum development, implementation & governance for the Lifestyle accessory design disciplines in the capacity of course lead and senior associate Design faculty. During present tenure at NID, he is motivated to discover the Design Research and Practices in indian context.An avid researcher working with many national and international level of academic collaborative, industry projects to establish design as a tool for social reform.

As part of the Design Practitioner he involved with a passion for many ambitious Nation building projects. The Design Intervention to Empower women Basket weavers of Ethiopia-An initiative taken under India - Africa forum summit ii.The project was commissioned by Ministry of External affairs,govt. of india & NID as a knowledge partner .The project headed by him has completed successfully with a significant impact on the participants in Ethiopia.Under the NID Outreach activities he was also heading the project,Design intervention for bamboo and Cane artisan in Bhutan - A craft Design initiative by APIC,Ministry of Economic Affairs, Royal Government of Bhutan & United Nation Development Program with NID as a knowledge partner. He is also involved as project for soft stone craft of Varanasi in Project USTTAD, an initiative taken by Ministry of Minority Affair,Govt. of India with NID as a knowledge partner.As part of the NID’s industrial design services activity He and his team also contributed towards the space planning ergonomics development for ships INS kochi.

Before coming to academics he also actively involved as A founding member of an MNC, setting up their design studio in ahmedabad,as india operation.He involved himself in multiple role such as Team building, branding, and management of a design studio while working as an industrial designer. As a design researcher assistant with the Industrial Design Centre, IIT Bombay, he and his team designed a model petrol pump for Bharat Petroleum Corporation Ltd.which is eventually replicated across India.