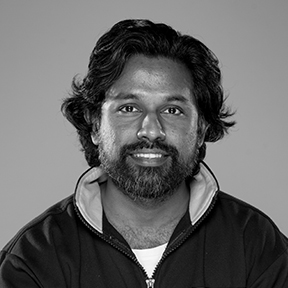 Austin Davis completed his schooling from St. Columba’s School, Delhi and shifted to Kerala from where he completed his B.Tech in Mechanical Engineering from Government Engineering College (GEC) Thrissur. From there he jumped to Gujrat, where he completed his Post Graduation in Toy and Game Design from National Institute of Design, Gandhinagar. At NID he developed an interest in the area of “Learning through Play” and ever since he has been looking for avenues to explore this idea

He stepped into the professional world as a Game Designer where he worked with multiple platforms of web, consoles and smartphones. He spent close to 3 years in the Game Design industry. He worked on Motion Controller based game (Client : Sony), promotional game for Sholay the movie (Client:Hungama), an app containing range of educational games with assessment features (Client: Schools) and a range of casual games based on Indian culture and history (Client : Gameveda.com). He landed back in Gujrat in 2014 where spent a year working on multiple projects like Board games as a tool to teach serious topics, Educational board games and DIY kits for primary school kids and also pursued his interest in illustrations.

His interest in academics grew in the same year as he came to NID as a Visiting Faculty twice for Systems Design in the TGD department. Later in 2015 he joined the 2 year long Design Teacher Development Programme (DTDP) at NID, then joined as a Teaching Associate in 2017 for few months and later got absorbed as an Associate Faculty in the month of November 2017. His interests lie in the domains of Structured Play (Games), Design Thinking through playful tools, Systems Thinking, Form and Material exploration and the passion for the idea of “Learning through PLAY” remains strong.