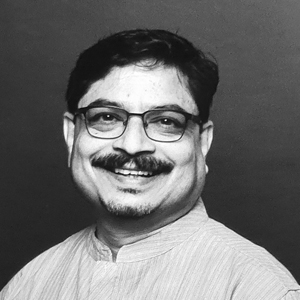 Chakradhar is a principal designer and teaches the theory and practice of Visual Semiotics, Aesthetics and Design Fundamentals in NID.

He has his doctoral research in photographic arts as a UGC-JRF scholar at M.S. University of Baroda. He joined Communication Design at NID, Ahmedabad in 1999 for a two-year Faculty Development Programme in Design Foundation and later co-led and led the Foundation Programme from 2001 to 2012. He has coordinated the Environmental Perception programme in villages for the students among many foundation courses until 2012. Later he was a discipline lead of the M. Des programme in Information and Interface Design at Bangalore Campus from 2012 to 2018.

His interests are information design and visualisation, icon, ideogram and symbol composition, visual rhetoric, and aspects of meaning, narrative and experientiality in virtual spaces. He teaches courses related to these in different disciplines at NID.

He has contributed to the curriculum in NID and at various institutes like IGNOU Delhi, PSSIVE Bhopal etc. He mentored programmes at NID Vijayawada in the year of its inception. He has written chapters on Drawing, Visualisation and Composition for an NCERT textbook on Graphic Design. His academic writings are published in NID's periodicals.

He chaired a session on design fundamentals in the International Conference' Design Education Tradition Modernity' held at NID in 2005, represented the institute at the Icograda conference at Nagoya Japan in 2004, was a jury member at the Moratuwa University, Colombo in 2010. He presented his experience teaching the Environmental Perception course in the 'Deconstructing Design Workshop' jointly organised by MHRD, IIT Hyderabad and IDC IIT Bombay in 2013. He co-chaired a national conference, 'Rethinking Basic Design Pedagogy', hosted by NID in 2015.

Chakradhar is a visual artist and poet, participated in the National Lalit Kala Academy exhibitions, and his poetry is published in the reputed literary journals of Marathi.